In the autumn of 2008, I toured around the Basque Country, located in the southwest of France and the northwest of Spain. It was my first solo foreign travel and a 40-day trip in the photogenic country. The trip happened when I was in the middle of a chaotic phase of my life. Two years before the trip, I had quit working for a company that I worked for ten years. And a year before the trip, I had stopped following a very strict vegan diet that I was on for a year. I imagine that at that time, my body had been as confused as my mind. It was through this trip that I experienced a transition of my body.

Making my trip
I had booked hotel stays only for the first 20 days of my trip, leaving the rest unplanned. Then, I carefully followed my heart’s desires through the trip; I asked myself every morning what I wanted to do and where I wanted to go. Whenever something caught my eyes while strolling in the tranquil port town, where there are many colourful boats docked at harbours, or while driving up the mountains, where white horses and sheep grazed on green meadows, I spared time to fully enjoy each of these sights.

The Basque Country has both coastal and mountainous regions, blessed with an abundance of seafood as well as food from the mountains. In fact, it is famous for its outstanding Basque gastronomy. The eateries there include local bars and restaurants as well as Michelin-starred restaurants. While the seafood is great—especially chipiron—the goat cheese, too, is delicious there. I visited bakeries for bread and sweets, and local markets for fruit and cheese. One of the perfect breakfasts on the bench at La Côte des Basques was the simple but freshly baked croissant and raspberries. Of all the food I have eaten there, what I still miss the most is Gâteau Basque, a traditional sweet that has the traditional Basque cross pattern that I like, on the top.

My favourite spots in the surf town for afternoon naps were a small patch of a lawn at a pier and a breakwater facing the beautiful mild-face Atlantic Ocean. The beach is quite popular for surfers. There are always some surfers enjoying the waves there. I used to enjoy watching them surfing for so long that I would not leave the bench until the ocean turned dark after sunset.

Chocola
And then, I met Chocola, a loveable Labrador Retriever in the Pyrenees, and I ended up staying twice at the same hotel.

Since his best friend, who was the assistant chef of the hotel and Japanese, was absent during my first stay, Chocola happily welcomed me for company. I spent half a day with him at the verdant yard writing a travel journal, making a sketch of him sleeping, and simply playing with him. We even became good friends through my three-night stay there. After that, I drove down the mountain and returned the rental car. Nevertheless, I missed him terribly in the following couple of days and couldn’t resist the urge to meet him. So two weeks later, I booked myself another car and a room at the same hotel and visited him. During my second stay, Chocola took me on a unique tour of his small village—to the stream where he enjoyed swimming, the huge backyard of someone’s house where I had to get permission to go through, and the clearing in the woods with a tree swing. It was an amazing time.

I still clearly remember seeing him in my car’s rearview mirror, running after me, and me crying so hard that my vision became hazy—my car almost dove into the cliff at the corner of the main street of the village! That forced me to get back to driving safely.

A surprise consequence
I used to have a complex about drawing because of unpleasant memories and so couldn’t do it easily before. But since I had decided to do whatever I felt like doing during the trip, I did it. By the end of the trip, I had made several sketches, including Chocola’s. As a result, another heart-warming story was born.

My trip took me a place called Hondarribia—a charming border town facing France. I stayed there for a week and became a frequent visitor of a bar that allowed me to watch La Liga Espanola, the Spanish football league. (I am a big fan of La Liga.) As I don’t drink alcohol, it is generally difficult for me to find a bar where I feel welcome. I couldn’t communicate much in Spanish, but the bartenders remembered my face and always treated me pleasantly. It had been very exciting to watch La Liga in Spain with the locals. But, unfortunately, the bar was closed on my last night in the town, and I didn’t have a chance to say good-bye to the owner. Instead of a “gracias” letter, though, I sat on the bench along with the local seniors, making a sketch of the bar, and left it—only with my name on the back—to a person who worked at the next bar and was one of the locals I watched La Liga together.

One day almost a year after that trip, I received a message on Facebook from the owner of the bar. In his message, he told me that he had been touched by my gesture and had been searching for some way to convey his appreciation to me. Then he caught on to the idea of Facebook and created an account to contact me. (It was the summer of 2009 and so I had created my account on Facebook only a couple of months before.) He sent a picture of the menu card of his bar on which he had put my sketch! Obviously, I was very happy about what happened because of my sketch.

An altering body
My tour of the Basque Country was one wonderful journey, coupled with a complete sense of freedom. Through this entire trip, I was not only hassle- and stress-free but also fear- and anxiety-free. Also, I hadn’t needed my brain for anything other than communicating in Spanish or French, which also meant that I often couldn’t calculate change! But something else had happened: the tension from my entire body was completely gone too.

You may have noticed, unease causes tension in your body—technically, in your muscles. Yoga usually helps me release my tension. But in this trip, I learned another way to do it. I also reconfirmed that releasing negative emotions reflects in one’s body.

As my trip continued, I had started feeling something happening in my body. For instance, I would feel like moving a particular body part, and almost every day that feeling occurred in me but for another body part. One day, I felt like moving my jaw, and I did so all day long—I even remember seeing some people glancing over their shoulders at me because they thought I was speaking to them. Another day, I wanted to move my hip joints. In short, wherever possible, I stretched my joints. Then, perhaps after two weeks or so, I suddenly caught my reflection in a mirror and noticed the changes that I had been feeling inside the body were now visible on me.

In my Yoga experience, I knew that once the tension releases from your muscles, they become more flexible and help in aligning one’s bones. But during my trip, the changes took effect from my head to toe without Yoga. Indeed, even my mum immediately spotted a change in my face, pointing out how my facial skeleton looked different after the trip.

Uniting my heart and body
An adult body once used to be a baby body that was fluffy and resilient. Of course, living and surviving in the modern society is tough and, sometimes, you may have to pretend to be a ‘hard-boiled’ person. But, I suppose, that is not what you want to be. We want to play, laugh, cry, and again laugh. And by expressing and not suppressing our emotions, we can actually set our body free. The more you pay attention to your body, the more you are aware, in turn helping you ease up. And when our body feels relaxed, we can be our natural selves!

Also, I realized that asking myself and knowing what I wanted to do at each moment through my trip was a good exercise. Previously, I used to prioritize things that I thought I should have done rather than the things I wanted to do. For this reason, I wouldn’t start doing anything until I got ‘true’ answers—when it’s true, you would know instantly it’s true. This exercise of listening to what I want to do has ultimately developed my ability to listen to my heart.

I recommend this exercise to all of you, whenever you can. You may be surprised to know your heart’s true desires, and perhaps be excited to know more about it.

(All the photographs were taken by Nalikolehua)

July 2022: The readings themselves really turned out to be beautiful and made me feel stronger. They have helped me on many levels. It only required me to trust and be calmly open to what they brought. I see the effects in my life: greater peace,…read more 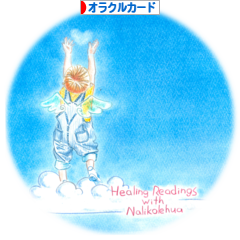